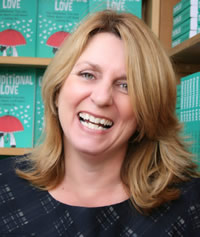 We are delighted to announce that Harriet Bourton, publisher for Orion Fiction, has acquired WEL rights in a six-figure deal from Hannah Ferguson to three new books by Sunday Times bestselling author Cathy Bramley.

The first of the three novels will be A Patchwork Family, which tells the story of Gina and her fight to save The Evergreens -home to three charming octogenarians who have far too much fun for their age – when it goes up for sale. In the past, Gina has shied from conflict, but The Evergreens and its residents have given her something to stand up for.

Orion will begin publishing Bramley in late summer 2019, kicking off with the author’s signature four-part novel serialisation titled A Patchwork Family, which will be published in paperback in early spring 2020.

Bourton said: “I am so excited about working with Cathy again after a few years apart. When she and I published her debut novel together, Ivy Lane, we began a truly creative, collaborative and fun relationship. Her stories about friendship, love and family sparkle with an easy warmth and jovial humour, which thousands of readers have taken to their hearts. She has enjoyed great success with Transworld the last few years, and I know that the rest of the team at Orion are just as eager as I am to continue establishing Cathy as a major commercial fiction brand on a list that is home to some of the very best in the business.”

Bramley said: “Parting company with Transworld, after nearly five wonderful years and ten books, wasn’t an easy decision and I am hugely grateful to the friends I leave behind. However, when the opportunity arose to work with the super-talented Harriet Bourton again, it felt like the perfect time for a fresh direction for my publishing and I’m thrilled to be joining the team at Orion. Harriet and I are already working on the first of what I hope will be three fabulous novels and I can’t wait to share our exciting plans with booksellers and readers.”

Ferguson said: “Cathy has achieved so much in the four and a half years since she was first published in 2014; publishing ten novels and seeing incredible chart success, as well as garnering a sea of dedicated readers. She’s such a hardworking author and I’m excited for her future with Harriet and the team at Orion.”

Riverrun acquires Our Fathers by Rebecca...