Share
18 Mar 2020 Archive
In the run-up to publication and the week’s following, we have been delighted to see the praise coming in for Eliese Colette Goldbach’s illuminating debut memoir Rust, published in the UK by Quercus on 5th March 2020. Over the weekend, the The Chicago Sun-Times included Rust in their ‘6 books not to miss’ and described it as a ‘gritty memoir of life in the Rust Belt’. 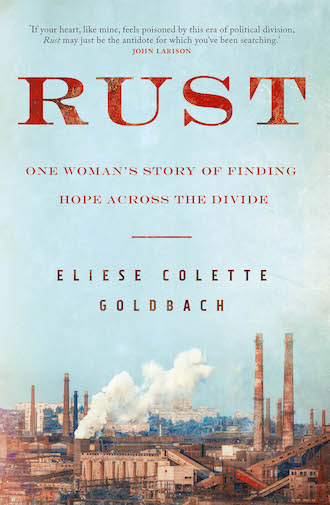 In the run-up to publication and the week’s following, we have been delighted to see the praise coming in for Eliese Colette Goldbach’s illuminating debut memoir Rust, published in the UK by Quercus on 5th March 2020. Over the weekend, the The Chicago Sun-Times included Rust in their ‘6 books not to miss’ and described it as a ‘gritty memoir of life in the Rust Belt’. We’ve rounded up the reviews and all the great things people have been saying about Rust so far:

‘A female steelworker’s soulful portrait of industrial life. Goldbach’s evocative prose paints a Dantean vision of the mill…but she discovers in the plant’s quirky, querulous employees an ethic of empathy and solidarity that bridges ideological divides. The result is an insightful and ultimately reassuring take on America’s working class’
Publisher’s Weekly

‘Eliese Colette Goldbach uses formal experiment, broken narrative, and a voice that admits doubt and questions the terms of its telling to fight silencing. Masterful form is often a question of well-managed rupture’
Leslie Jamison, New York Times bestselling author of The Recovering

‘There have been a lot of books written about life in industrial cities in the Midwest, but relatively few written by people who actually live in them, and few so heartfelt and unsparing. Rust is at once a unique memoir and a broad indictment of America’s broken promise that anyone who came of age in the 21st century will find painfully familiar.’
Sarah Kendzior , New York Times bestselling author of The View from Flyover Country

‘Rust is a soulful telling of America’s stubborn and forgotten core. Deeply honest and defying easy sentimentality, this book heralds the arrival of a true talent’
Adam Chandler, author of Drive-Thru Dreams

‘Goldbach turns in a gritty memoir of working in a steel mill while wrestling with the world beyond…. An affecting, unblinking portrait of working-class life’
Kirkus Reviews

‘A haunting meditation from the far shores of addiction, mental illness, and obsession’
Ladette Randolph, author of Leaving the Pink House

‘In our whacked-out national moment, Eliese Colette Goldbach arrives in the nick of time, a fresh voice to revive an old, substantial truth: that one person’s hard work, achieved despite troubles of heart and finance, of faith and family, is the most enduring American value of all. Rust is a memoir of steel and grit, yes, but soul above all, a young Cleveland millworker’s eloquent tale of hard times that plants its boots squarely on the bookshelf of American working-class literature’
David Giffels, author of Barnstorming Ohio: To Understand America and The Hard Way on Purpose: Essays and Dispatches from the Rust Belt

‘Rust is a brave, heartfelt memoir whose pages overflow with hard-earned wisdom. Goldbach’s story of embodying our national extremes–conservative vs progressive, religious vs secular, white collar vs blue–has endowed her with a singular ability to see through our partisan delusions and identify what, truly, unites us still as Americans. If your heart, like mine, feels poisoned by this era of political division, Rust may just be the antidote for which you’ve been searching’
John Larison, author of an Entertainment Weekly Best Book Whiskey When We’re Dry

‘The steel mill burns on in the heart of Cleveland, and in the pages of Eliese Collette Goldbach’s transformative debut. This is indeed a memoir of steel and grit, the extraordinary work of every ordinary day. But like all great stories, Rust is also a love story?about a craft, a city, and the communities we forge there. Goldbach reminds us that what we make in turn makes us who and what we are’
Dave Lucas, author of Ohioana Book Award for Poetry winner Weather

‘Goldbach’s fearless, eye-opening book reminds us that the bonds between people can transcend their ideological differences―creating hope even in the darkest times and the most unexpected places.’
Apple Books Review

‘Bringing her perspective as an outsider―both as a woman and a liberal―to this insightful account of the steel worker’s lot, Goldbach displays refreshing candor and hard-earned knowledge about the issues that divide us and the work that unites us.’
Booklist

‘This beautifully told, nuanced memoir will strike a chord with fans of J.D. Vance’s Hillbilly Elegy, and pique the interest of sociology scholars.’
Library Journal

‘A gritty memoir of life in the Rust Belt she’d so desperately wanted to escape and of the hardworking people she came to love.’
Chicago Sun-Times, ‘6 Books Not to Miss’

Eliese Colette Goldbach is a steelworker at the ArcelorMittal Cleveland Temper Mill. She received an MFA in nonfiction from the Northeast Ohio Master of Fine Arts Program. Her writing has appeared in Ploughshares, Western Humanities Review, Alaska Quarterly Review, McSweeney’s Internet Tendency, and Best American Essays 2017. She received the Ploughshares Emerging Writer’s Award and a Walter Rumsey Marvin Grant from the Ohioana Library Association, which is given to a young Ohio writer of promise.
We represent Eliese Colette Golbach in the UK on behalf of Sarah Levitt at Aevitas Creative Management.