Share
05 Jun 2020 Archive
We are unbelievably thrilled to be heading into the weekend with the excellent news that Helen Fields and the latest gripping novel in her DI Callanach and DCI Turner series, Perfect Kill, have been longlisted for the CWA Ian Fleming Steel Dagger award. Perfect Kill was published in kindle, audiobook and ebook by Avon in February 2020. 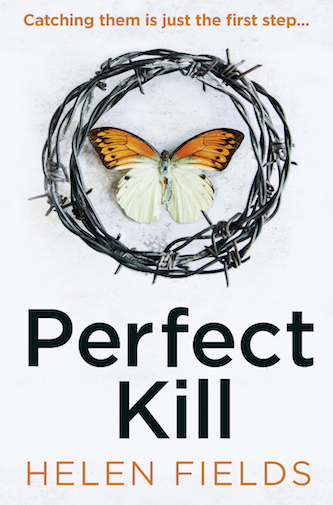 We are unbelievably thrilled to be heading into the weekend with the excellent news that Helen Fields and the latest gripping novel in her DI Callanach and DCI Turner series, Perfect Kill, have been longlisted for the CWA Ian Fleming Steel Dagger award. Perfect Kill was published in kindle, audiobook and ebook by Avon in February 2020.

The Crime Writers’ Association was founded in 1953 by John Creasey. Its overall aim is to support, promote and celebrate this most durable, adaptable and successful of genres. Its everyday aim is to support every kind of crime writer of both fiction and non-fiction and to promote their work. The CWA Dagger Awards are the premier literary crime writing awards in the United Kingdom, whose Daggers are (mainly) nominated by publishers and judged by industry professionals.

He had never heard himself scream before. It was terrifying.

Alone, trapped in the darkness and with no way out, Bart Campbell knows that his chances of being found alive are slim.

Drugged and kidnapped, the realisation soon dawns that he’s been locked inside a shipping container far from his Edinburgh home. But what Bart doesn’t yet know is that he’s now heading for France where his unspeakable fate is already sealed…

DCI Ava Turner and DI Luc Callanach are working on separate cases that soon collide as it becomes clear that the men and women being shipped to France are being traded for women trafficked into Scotland.

With so many lives at stake, they face an impossible task – but there’s no option of failure when Bart and so many others will soon be dead…

Helen Fields’ first love was drama and music. From a very young age she spent all her free time acting and singing until law captured her attention as a career path. She studied law at the University of East Anglia, then went on to the Inns of Court School of Law in London.

After completing her pupillage, she joined chambers in Middle Temple where she practised criminal and family law for thirteen years. Undertaking cases that ranged from Children Act proceedings and domestic violence injunctions, to large scale drug importation and murder, Helen spent years working with the police, CPS, Social Services, expert witnesses and in Courts Martials.

After her second child was born, Helen left the Bar. Together with her husband David, she went on to run Wailing Banshee Ltd, a film production company, acting as script writer and producer.

Helen self-published two fantasy books as a way of testing herself and her writing abilities. She enjoyed the creative process so much that she began writing in a much more disciplined way, and decided to move into the traditional publishing arena through an agent.

Perfect Remains is set in Scotland, where Helen feels most at one with the world. Edinburgh and San Francisco are her two favourite cities, and she travels whenever she can.

Beyond writing, she has a passion for theatre and cinema, often boring friends and family with lengthy reviews and critiques. Taking her cue from her children, she has recently taken up karate and indoor sky diving. Helen and her husband now live in Hampshire with their three children and two dogs.