Share
02 Jun 2020 Archive
The reviews have been flooding in on both sides of the Atlantic, since Louise Fein’s powerful debut novel of courage and forbidden love, People Like Us was published in ebook and audio by Head of Zeus in the UK last month, and in hardback, ebook and audio in the US by William Morrow under the title Daughter of the Reich. Head Of Zeus will publish the UK hardback edition of this heartbreaking romance set against the backdrop of the the Third Reich on 6th August 2020. 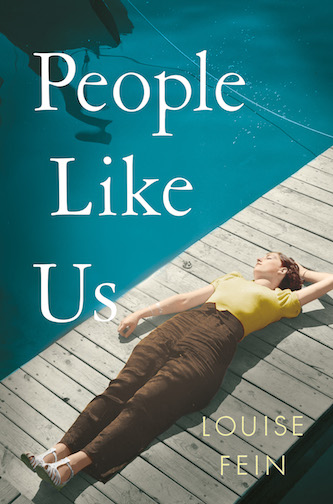 The reviews have been flooding in on both sides of the Atlantic, since Louise Fein’s powerful debut novel of courage and forbidden love, People Like Us was published in ebook and audio by Head of Zeus in the UK last month, and in hardback, ebook and audio in the US by William Morrow under the title Daughter of the Reich. Head Of Zeus will publish the UK hardback edition of this heartbreaking romance set against the backdrop of the the Third Reich on 6th August 2020.

We wanted to share all the wonderful things authors and publications have said about the book by collecting together our favourite reviews below:

‘Beautiful and absorbing — a vital story of kindness, and a reminder that humanity can flourish in the darkest of times.’
Caroline Hulse, author of The Adults

‘Meticulously researched and beautifully written, Hetty and Walter’s love story takes us deep into the heart of a nation on the brink of darkness. A terrifying real, utterly compelling and thought-provoking read.’
Nikola Scott, author of Summer of Secrets

People like Us is a fascinating immersive book set in 1930’s Germany and seen through the eyes of main character, teenage Hetty. Hetty’s struggle is brilliantly portrayed, she is torn between her adoration of Hitler and her equally powerful draw towards her childhood friend (and saviour) Walter – who happens to be Jewish. Love kind of wins out – or does it – with an enormous cost to those involved. People Like Us is part romance, part character study, part call to arms. The subject matter – racial hate – is sensitive but we are in safe hands with Fein who writes with great passion and urgency. The minor characters are living, breathing, three-dimensional people, each with their own motivations and dark secrets. This is a must-read for anyone interested in understanding how normal people/people like us get caught up in fascism and how it feels when friends and neighbours become enemies.
Lizzie Page, author of When I Was Yours

‘I adored this book because not only is it beautifully written, it also tells a familiar story from a very unfamiliar perspective: that of a naïve German teenager caught up in the rise of Nazism, and her gradual realisation of the inhumanity driven by Aryan fanaticism. Louise Fein’s characters help us understand how so many people were taken in by Nazi propaganda, and the terrible, heartbreaking dilemmas they faced trying to protect the people they loved. This is historical fiction at its absolute best.’
Liz Trenow, author of Under a Wartime Sky

‘Loved People Like Us by Louise Fein. Heartbreaking and thought-provoking story about forbidden love during Nazi Germany. Had me gripped to the very end.’
Luke Allnut, author of We Own the Sky

‘People like Us by Louise Fein is a wonderful book. It wraps itself slowly round you like a warm blanket, although that blanket is often scratchy and can feel more like a hair shirt at times. The writing is deceptively gentle but there is an underlying power and precision in Fein’s words that can take your breath away. The Romeo and Juliet story of a young couple in Leipzig, Germany in the years before the second world war is poignant and heart-breaking enough, but when you factor in the chilling message that anyone is capable of possessing the most appalling attitudes towards their fellow humans, and worse, then this becomes a book for our time. I cannot recommend it highly enough.’
Gill Thompson, author of The Oceans Between Us

‘I couldn’t believe it when I read that this is a debut, because it’s so skilfully written. We feel Hetty’s character development through the pages; the scene-setting and historical background are unobtrusive but utterly convincing. This is an important subject to write about and I learned a lot, but above all it is a powerful, unforgettable love story.’
Gill Paul, author The Secret Wife

‘This compelling and deeply-moving story follows the inexorable rise of Hitler’s Nazi party and Germany’s descent into darkness in the years leading up to the outbreak of World War 2. Through Hetty’s eyes, the reader experiences the grim march of extreme nationalism and the anguish of lives brutally torn apart. And yet People Like Us is also a reminder that – even in the darkest times – the extraordinary power of love can light the way.’
Fiona Valpy, author of The Dressmaker’s Gift

‘An outstanding and heart-breaking story of Nazism seen from the “other side”: blind indoctrination is transformed into true heroism by the power of love.’
Sharon Maas, author of The Violin Maker’s Daughter

‘Louise Fein’s Daughter of the Reich is so real–a beautifully written and emotional wrenching journey into World War II tumult and tragedy. Amazingly, this novel is both sweeping and intimate. Although the book brings history to life, its dynamic characters present a timely truth we should all grasp and embrace: We must stand up against those who preach hate.’
Karen Harper, NY Times bestselling author of The Queen’s Secret

‘Louise Fein’s Daughter of the Reich spins childhood innocence shattered, the tendency for society to carry us along in wrong directions, and the importance of standing up against tyranny in ways small and large into an absorbing, heart-wrenching story of love and letting go—and a lesson for us all.’
Meg Waite Clayton, New York Times bestselling author of The Last Train to London

‘Daughter of the Reich is an incredibly moving, utterly captivating, beautiful story of love, courage, and the strength of the human spirit. It was both heartbreaking and hopeful at once. The ending had me in tears.’
Rhiannon Navin, author of Only Child

‘An addictive, crucial read for our times—reminding us why it’s so imperative never to forget history and providing a cautionary tale about what will happen if we do.’
Jenna Blum, New York Times and internationally bestselling author of Those Who Save Us

‘Fein shows the slow twisting of the people in Hetty’s city, suggesting parallels in the United States today.’
Library Journal

‘Revelatory and harrowing with touches of grace…the characterizations are well done, with the lovers and Hetty’s relationship with her beloved brother particularly well rendered. An extraordinary debut novel. Bravo!’
The Historical Novel Society

‘A beautifully painted masterpiece that explores how people blindly followed their leaders without asking questions, and how even during those tumultuous times love could still be found… Louise Fein’s novel is a work of well-researched historical fiction that transports you to another time and place. It’s full of raw emotion and strong characters. It’s the type of book that should be read, if for any other reason than to remind of us the road once traveled.’
The Real Style Network

‘By far, Daughter of The Reich is one of the most unique World War II stories that I have read, and in full honesty, I couldn’t help but love the story… a beautifully written story, filled with some hard to swallow pills, but nonetheless, it is a beautiful story—a story in which you wouldn’t want to put down until the end.’
The Manhattan Book Review

‘Daughter of the Reich is a captivating story on finding love and realizing that what your family has led you to believe may not really be as justice filled as it tries to appear…Daughter of the Reich is one of those important stories that need to be shared. It’s that story of fighting for what you believe in. For defying those who would have you become some twisted version of yourself. For finding love and growing from it. It may be a difficult read, but that’s what makes it worthwhile.’
The Nerd Daily

Louise Fein holds an MA in Creative Writing from St Mary’s University. Prior to studying for her master’s, she ran a commodity consultancy business following a career in banking and law. She lives in Surrey with her family. People Like Us is inspired by her family history, and by the alarming parallels she sees between the early 30s and today.

Helen Fields Longlisted for the CWA...