Share
07 Jul 2021 Archive
Ever wondered what the future of science means for medicine and how new advances and new technologies might allow us to predict the paths our bodies might take? 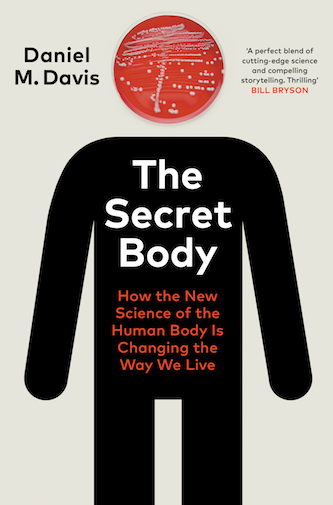 Ever wondered what the future of science means for medicine and how new advances and new technologies might allow us to predict the paths our bodies might take? Dan Davis’ fascinating and insightful new book The Secret Body: How the New Science of the Human Body Is Changing the Way We Live, published by Bodley Head, explores just that.

In the run up to and the week since publication, Dan has featured in several publications and given thought-provoking interviews and talks on how dramatic breakthroughs in our understanding of the body will profoundly change the experience of being human in the coming century. He featured in interviews with The Times and The Observer, he answered The Daily Mirror‘s questions on ‘What it will take to live with Covid’, he wrote an article on engineered immunity for New Scientist, and gave talks at the Royal Institution and  How To Academy (with Robert Ince) on how new science of the human body will change the way we live.

The Secret Body has also garnered brilliant reviews from Brian Cox to Bill Bryson. You can see a full list below:

‘An extraordinary journey that reveals the magnificence, intricacy and beauty of the human body, fundamentally changing the way we see ourselves. Masterful’
Alice Roberts

‘A beautifully rendered picture of the startling new discoveries in human biology which are radically altering our picture of how we function and what our future holds.’
Brian Cox

‘What we now know about the human body would seem magical to people just a hundred years ago. This book by Daniel Davis takes us on a grand voyage to see how we reached our current state of understanding. It interweaves the invention of very clever tools with the great and amazing discoveries they made possible to cover every aspect of ourselves, from the amazing types of the trillion cells in us, how we get started from a single cell, to the amazing connections formed in our brains that allow us to think, and the microbes that live in us and are part of us. At the same time Davis tells us the very human stories of the many scientists who made these discoveries possible, including the ones who never got the fame they deserved. The book often reads like a detective story and anyone interested in modern biology will both enjoy it and learn much from it. Certainly I did.’
Venki Ramakrishnan

‘The thing that amazes me about Daniel Davis’ writing is that even as a physician and an academic I get so much out of it. With this book Davis joins the pantheon of truly great communicators – he unpacks the science not simply as dogma or as a set of fixed facts but rather the way it should be explained – as a series of experiments undertaken by extraordinary people interpreted in context. This is a stunning book that everyone who has a body will love. Whether you’re an interested lay person, a scientist or a doctor this book will change the way you think about yourself and the people around you.’
Chris van Tulleken

‘A big-picture forecast of how medicine stands on the threshold of a revolution that will radically change all of our lives … Davis is a polar opposite of the typecast propeller-hatted futurologist. He is beguilingly informal and affably humorous’
The Times

‘Reading The Secret Body is like spending time with an eloquent, well-connected and entertaining enthusiast who has intimate knowledge of the secret worlds that lie within all of us’
Roger Highfield