Stepping Up is a Sunday Times bestseller

Share
01 Apr 2022 News
We are over the moon that Sarah Turner's fabulous fiction debut, Stepping Up, is a Sunday Times bestseller! 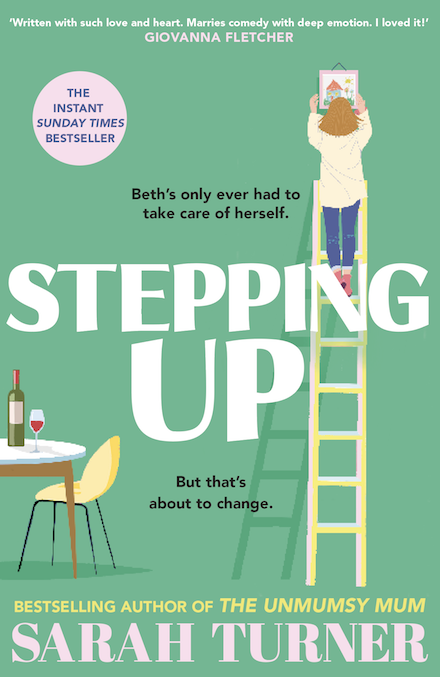 We are over the moon that Sarah Turner‘s fabulous fiction debut, Stepping Up, is a Sunday Times bestseller! The uplifting and poignant novel reach number 9 in the charts after publishing on 21st March with Transworld. Stepping Up also reached number 2 in The Bookseller‘s Heatseekers Fiction chart on the 1st April! Congratulations, Sarah!

Rights have been snapped up in Germany by Bastei Lübbe at auction, Dutch rights were pre-empted by AW Bruna, Russianrights have sold to Storytel and Chinese rights sold to CCTP.

Beth has never stuck at anything.

She’s quit more jobs and relationships than she can remember and she still sleeps in her childhood bedroom. It’s not that she hasn’t tried to grow up, it’s just that so far, the only commitment she’s held down is Friday drinks at the village pub.

Then, in the space of a morning, her world changes.

An unspeakable tragedy turns Beth’s life upside down, and she finds herself guardian to her teenage niece and toddler nephew, catapulted into an unfamiliar world of bedtime stories, parents’ evenings and cuddly elephants. Having never been responsible for anyone – or anything – it’s not long before she feels seriously out of her depth.

What if she’s simply not up to the job?

With a little help from her best friend Jory (purely platonic, of course …) and her lovely, lonely next-door neighbour, Albert, Beth is determined that this time she’s not giving up. It’s time to step up.

Sarah Turner lives in Devon with her husband and three sons. After graduating with first-class honours in Philosophy from The University of Exeter, she dabbled in careers in finance then higher education before a ‘warts and all’ parenting blog she’d started to let off steam gathered unexpected momentum and writing became her full-time job. She has since written three Sunday Times bestsellers: The Unmumsy Mum, The Unmumsy Mum Diary and The Unmumsy Mum A-Z. The Unmumsy Mum was voted number 4 in Amazon’s Top 10 books of 2016 (as voted for by Amazon customers) and was also shortlisted for Book of the Year (non-fiction, lifestyle) at the 2017 British Book Awards. Stepping Up is Sarah’s first novel, the spark of an idea coming from a conversation about will-writing and more specifically guardianship, should the unthinkable happen. Sarah likes bookshops, walks on Dartmoor (when the kids aren’t whingeing) and pretends to like running, though she’s started Couch to 5k three times and keeps ending up back on the couch. She doesn’t like coffee, films with sharks in or writing about herself in the third person. You can follow Sarah’s reading, writing and parenting adventures on Facebook, Instagram and Twitter (@theunmumsymum).