Waterstones Thriller of the Month: Our Fathers by Rebecca Wait

Share
01 Feb 2021 News
February is here, and the month is off to a flying start as Rebecca Wait’s powerful new novel Our Fathers has been announced as Waterstones’ Thriller of the Month! 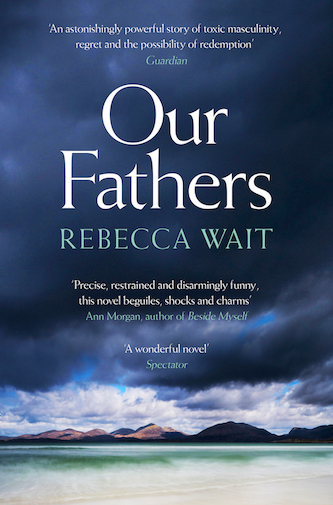 February is here, and the month is off to a flying start as Rebecca Wait’s powerful new novel Our Fathers has been announced as Waterstones’ Thriller of the Month! They described it as ‘a gripping thriller and an insightful study of a family tragedy in a tight-lipped community’. Our Fathers was published in paperback by riverrun in January 2021, and was a Guardian ‘Book of the Year in 2020′. We’re so thrilled to see this book being championed by Waterstones, congratulations Rebecca!

Tom Baird is a haunted man

When Tom was ten years old, his father took a shotgun and shot his family: his wife, his son and baby daughter, before turning the gun on himself. Only Tom survived.

Tom Baird is an exiled man

He left his tiny, shocked community on the island of Skellag and the strained silence of his Uncle Malcolm’s house while still a young boy. For twenty years he’s tried to escape his past.

Without knowing how to ask, he needs answers – from his uncle, who should have known. From his neighbours, who think his father a decent man who ‘just snapped’. From the memories that haunt the wild landscape of the Outer Hebrides.

And from the silent ones who know more about what happened – and why – than they have ever dared admit.

By turns gripping, beautiful, devastating and tender, Our Fathers is a story about violence and redemption, control and love. With understated compassion and humour, Rebecca Wait gives a voice to the silenced and the silences between men of few words.

Rebecca Wait graduated from Oxford University in 2010 with a first class degree in English. She’s been writing since she was a child and has won numerous prizes for short stories and plays. Her novels include The View on the Way Down, The , and Our Fathers. She lives in London.