Share
20 Jan 2022 News
We are pleased to announce that Dr Oskar Jensen's compelling and unexpected portraits of London's poor in the 19th century, Vagabonds: Life on the Streets of Nineteenth-Century London, has been acquired by Duckworth Books. 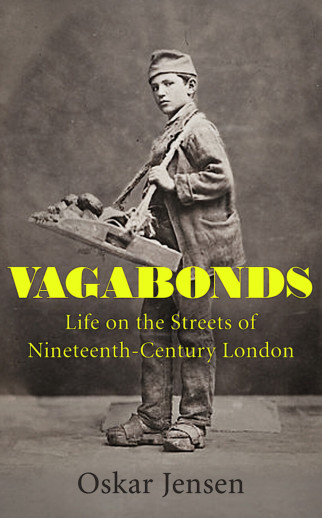 We are pleased to announce that Dr Oskar Jensen‘s compelling and unexpected portraits of London’s poor in the 19th century, Vagabonds: Life on the Streets of Nineteenth-Century London, has been acquired by Duckworth Books. World English Language and Audio rights were sold to publisher Rowan Cope by Joanna Swainson. Vagabonds is set to hit shelves in June 2022.

Cope said: “There are so many fascinating lives that have been left out of or overlooked in our history books. Black Victorians and Vagabonds are two exciting  – and important – landmark histories that pay due tribute to those lives, while also making a necessary and timely contribution to global debates about social inequality and the people we commemorate or erase. We feel very privileged to publish both titles on the Duckworth list.”

Until now, our view of bustling late Georgian and Victorian London has been filtered through its great chroniclers, who did not themselves come from poverty – Dickens, Mayhew, Gustave Doré. Their visions were dazzling in their way, censorious, often theatrical. Now, for the first time, this innovative social history brilliantly – and radically – shows us the city’s most compelling period (1780–1870) at street level.

From beggars and thieves to musicians and missionaries, porters and hawkers to sex workers and street criers, Jensen unites a breadth of original research and first-hand accounts and testimonies to tell their stories in their own words. What emerges is a buzzing, cosmopolitan world of the working classes, diverse in gender, ethnicity, origin, ability and occupation – a world that challenges and fascinates us still.

Oskar Jensen is an author and academic with a doctorate in History from Christ Church, Oxford. He has held positions at King’s College London and Queen Mary, University of London, where he was a Leverhulme Early Career Fellow, and he is now Senior Research Associate in the department of Politics, Philosophy, Language and Communication Studies at the University of East Anglia. Oskar writes for New Statesman, has appeared on BBC1’s Who Do You Think You Are? and BBC Radio 3 and 4, and was the historical advisor for the 2018 ITV/Amazon production of Vanity Fair. Vagabonds is his first trade non-fiction book.

You can read the Bookbrunch article here.

This Mortal Coil is one to...

Lorraine Brown’s Uncoupling Shortlisted in the...