With This Kiss is a Waterstones best fiction book for 2022 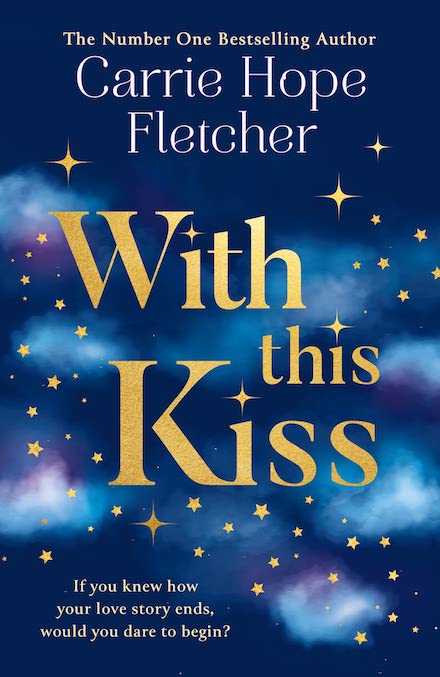 We’re thrilled to see Carrie Hope Fletcher‘s romantic and uplifting With This Kiss, featured in the fiction category of Waterstones’ Best Books for 2022 round-up, which they called an ‘unforgettable love story’.

With This Kiss was published in hardback by HQ in April 2022, with the paperback set to follow in March 2023. It became a Sunday Times bestseller shortly after it’s release, reaching number six in the hardback top 20.

When their lips touch, will she seal his fate?

From the outside, Lorelai is an ordinary young woman with a normal life. She loves reading, she works at the local cinema and she adores living with her best friend. But she carries a painful burden, something she’s kept hidden for years; whenever she kisses someone on the lips, she sees how they are going to die. But she’s never known if she’s seeing what was always meant to be, or if her kiss is the thing that decides their destiny. And so, she hasn’t kissed anyone since she was sixteen.

Then she meets Grayson. Sweet, clever, funny Grayson. And for the first time in years she yearns for a man’s kiss. But she can’t… or can she? And if she does, should she try to intervene and change what she sees?

Spellbinding, magical and utterly original, With This Kiss is one love story you will never forget.

Carrie Hope Fletcher is an actress, singer, author and vlogger. Carrie’s first book, All I Know Now, was a number one Sunday Times bestseller and her debut novel, On the Other Side, also went straight to number one. Carrie played the role of Eponine in Les Misérables at the Queen’s Theatre in London’s West End for almost three years. She has since stared in and received awards for a number of productions including The War of the Worlds, The Addams Family and Heathers: The Musical. She will soon star in Andrew Lloyd Webber’s Cinderella in the lead role. Carrie lives just outside of London with numerous fictional friends that she keeps on bookshelves, just in case.